Why You Should EDC a Flashlight

Last modified on July, 2019 by Chinhua 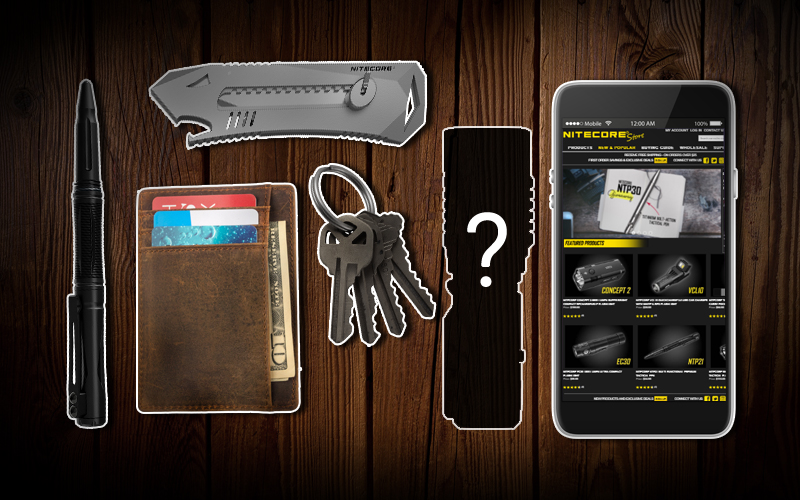 Raise your hand if you carry a flashlight with you all the time. If your hand is up, you can go ahead and skip this article. Everyone else, keep reading.

We’re here to shed some light on why you should EDC a flashlight, and give you some suggestions for picking out the best light for your carry.

5 Reasons to Include a Flashlight in Your Everyday Carry

#1 A Flashlight is Purpose-Built for Illumination

Unlike your cell phone which was primarily designed as a communication device, an EDC flashlight is built expressly for the purpose of providing light. Yes, your cell phone will work in a pinch, but it will never be able to do the job as well as a true flashlight. Why?

First and foremost, the vast majority of EDC flashlights will be much brighter than anything your cell phone can produce. The other thing you’ll notice is that while your cell phone flashlight does okay with reading and anything up close, the floody output isn’t very useful for anything more than a few feet in front of you. EDC flashlights on the other hand use a reflector to throw light over longer distances and add focus to the output. The result is a much more useful beam of light that your eyes will appreciate.

#2 A Flashlight is Easy to Deploy

If you have a smartphone with a flashlight app, go ahead and turn on the app right now. Notice how long this took you. Did you have to unlock your phone? How many swipes to find the app? Not very convenient when you compare it to the ease of turning on a flashlight with 1 single press.

Now imagine you’re walking late at night and hear something behind you. Do you want to be fumbling with your unlock screen in a panic or confidently shining your EDC torch in the direction of the threat?

#3 A Flashlight has a Dedicated Battery

If you’re relying on your cell phone as a flashlight, inevitably you’re going to run into a situation where your phone is low on charge. An EDC flashlight prevents this problem by putting your light source on its own dedicated battery.

And if you frequently use your flashlight throughout the day or are a buy-it-for-lifer, the ability to swap out and charge your batteries is invaluable.

#4 Flashlights Prepare You for Emergencies

If you weren’t already a flashlight EDC enthusiast, this is probably one of the first reasons you think of for even owning a flashlight. From power outages to flat tires, you just never know when you’re going to be caught in the dark, and a flashlight prepares you for it all.

#5 Some Jobs Require a Flashlight

If you work in the dark, you already know the value of a good flashlight. Law enforcement, construction workers, electricians, first responders, mechanics, security guards — we’re looking at you.

And even if you aren’t what we’d consider a flashlight power user like the mentioned professions above, having a flashlight handy at work is never a bad thing. Think about all the times you’ve had to search for something that fell in a dark crack, or walked to your car in the dark, or just needed a little more light to see better. Remember, it’s about staying prepared and ready.

What to look for in an EDC flashlight?

We already put together an in-depth buying guide for everyday carry flashlights you can find here. For the TLDR version, here are 3 quick points to remember:

Beacon Mode Flashlights
How to Signal SOS with a Flashlight?
What flashlight does the military use?
Flashlight Safety 101
Leave a Reply