Free Shipping on orders over $35
First Order Savings & Exclusive Deals Sign Up Connect With US
Posted in Flashlights, Flashlight 101

Last modified on December, 2020 by Chinhua

You’ve probably noticed that many flashlight manufacturers will boast about the “high lumen” output a flashlight can reach. Lumens, if you didn’t know already, are the unit of measure for brightness and an easy way for you as a consumer to judge if a flashlight will meet your needs.

Less than a decade ago, flashlights over 1000 lumens were considered quite bright. Although this is still a very useful (and bright) output, LED technology has improved to the point where flashlights over 5000 lumens are becoming much more common and affordable.

What Goes Into Making the Brightest High Lumen Flashlights?

The first, and most important, thing that controls the potential brightness of a flashlight is the LED used. Every LED has a maximum amount of lumens it can produce and not a single lumen more. Once that number is reached, the only way to increase brightness further is to add more LEDs.

LED manufacturers like CREE will indicate the maximum lumens per watt an LED is capable of producing as well as the maximum watts the LED can support before risking potential damage.

The second factor controlling a flashlight’s brightness is the power supplied by its battery. In general, the more watts (power) flowing to an LED, the brighter it will appear. Need more a brighter output? Add more power!

As you can probably guess, this is one of the big reasons why the brightest LED flashlights are powered by li-ion batteries. Traditional alkaline and ni-Mh battery chemistries just don’t provide the watt power needed in the same, energy dense package.

You might be wondering if the reflector has anything to do with a flashlight’s brightness. The short answer is no.

The role of the reflector is to collimate (a fancy word for “align”) the light emitted by the LED which in turn makes a flashlight beam more or less focused. Although a flashlight like the NEW P30 might appear brighter than the TUP to the naked eye, the truth is both flashlights emit the exact same amount of lumens.

The 10 Brightest High Lumen Flashlights in the NITECORE Line Up 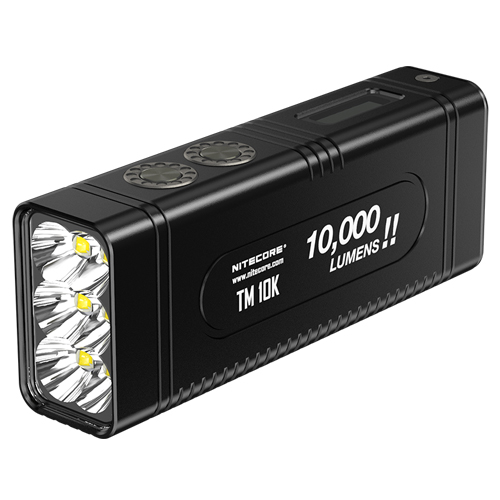 The NITECORE TM10K flashlight pushes the boundaries of LED technology with its 10,000 lumen burst mode and justifies the Tiny Monster name. Powered by six (6) CREE XHP35 HD LEDs, the TM10K offers High and Turbo outputs for intensely bright lighting that’s sure to impress and Ultralow, Low and Mid outputs for up close and general lighting. 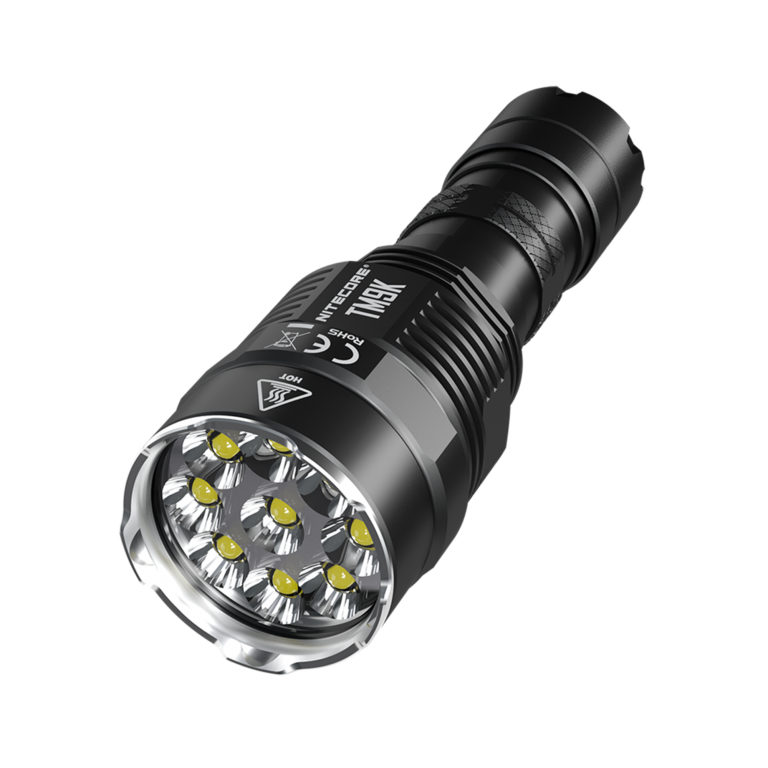 The NITECORE TM9K is the ultimate rechargeable flashlight putting 9500 lumens at your fingertips. Access instant 9500 lumen turbo with one touch of the mode switch that reaches over 293 yards of throw or double tap for blinding tactical strobe. A true tiny monster all this power fits in an aluminium unibody frame that is under five inches in length. With the included metal pocket clip and holster, the TM9K is easy to carry at just over seven ounces. 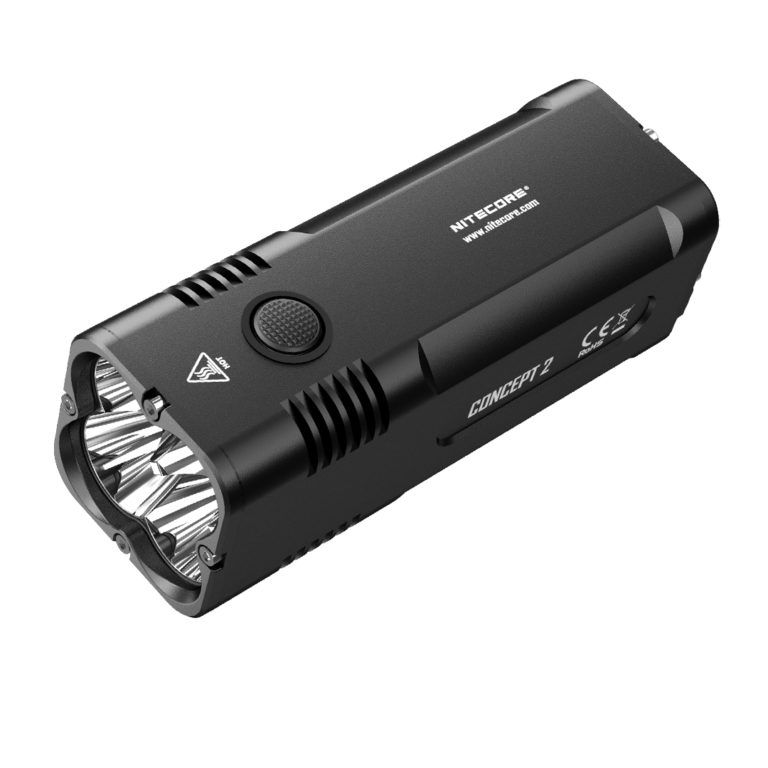 Welcome to the cutting edge of flashlight technology with the NITECORE Concept 2 rechargeable flashlight. The power of four CREE XHP35HD LEDs combines for a maximum output of 6500 lumens with 435 yards of throw — all encompassed in a compact, aluminum body that comfortably fits in your palm! Measuring only 4.43″x1.57″x1.57″ and weighing 12.28 oz, the Concept 2 is ideal for exploring, camping, everyday carry and search operations. 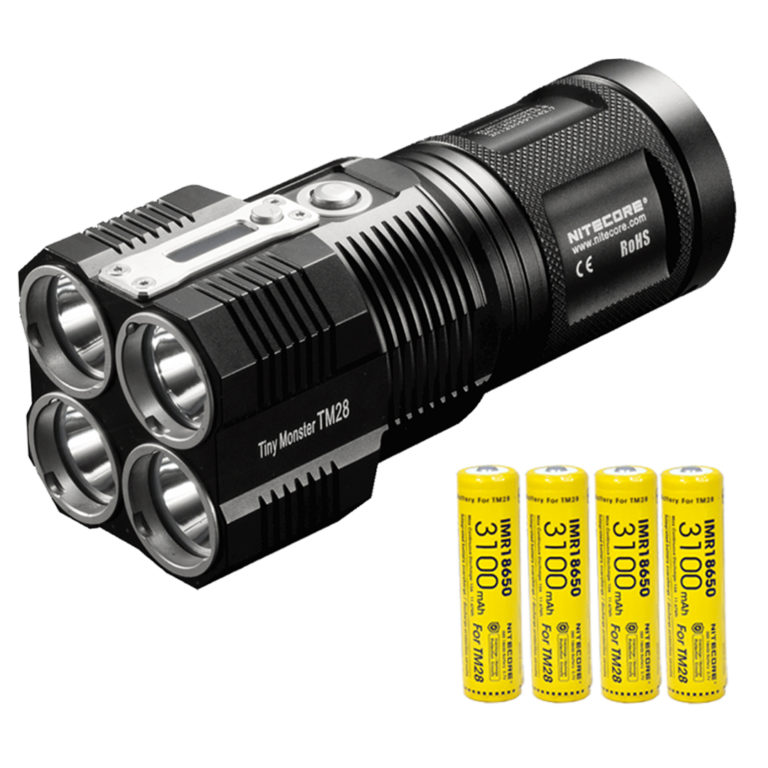 The Nitecore TM28 is here and ready to light up the sky. This upgrade to the TM26 is truly a Tiny Monster. It boasts a blinding 6000 lumens, capable of up to 716 yards throw, all condensed into a palm-sized package. The TM28 utilizes four CREE XHP35 HI LEDs to combine for 107,200 candelas, making it an ideal flashlight for search and rescue operations. 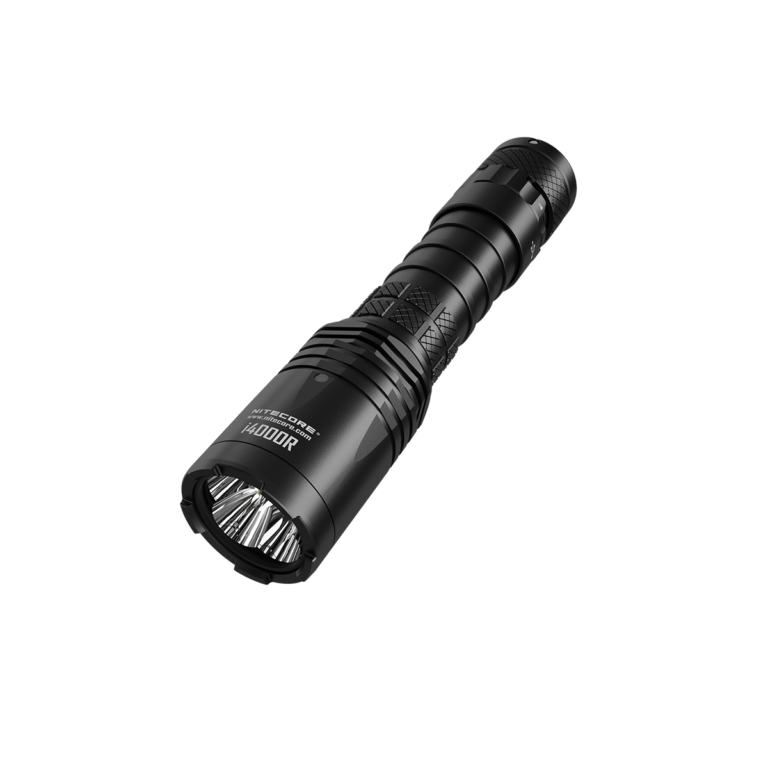 Made with law enforcement and military personnel in mind, the NITECORE i4000R draws on the latest technology to deliver an impressive 4400 lumen max output at 251 yards of reach. Not only is the i4000R extremely bright and compact, but built-in USB-C charging make it one of the most convenient flashlights around. 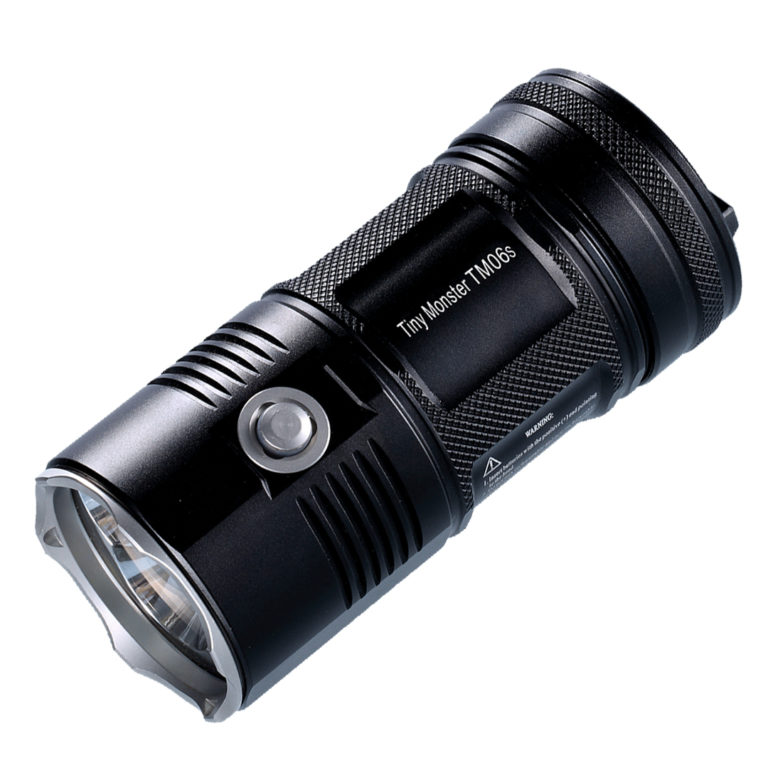 The Nitecore TM06S is a longer-throwing, brighter lumened, more lightweight upgrade to its TM06 predecessor. The light boasts 365 yards, 27 more than the original, and a blinding 4000 lumens, 200 more than the original. Even with these impressive improvements, the TM06S is still able to weigh even less than its predecessor at a compact 9.38 ounces. 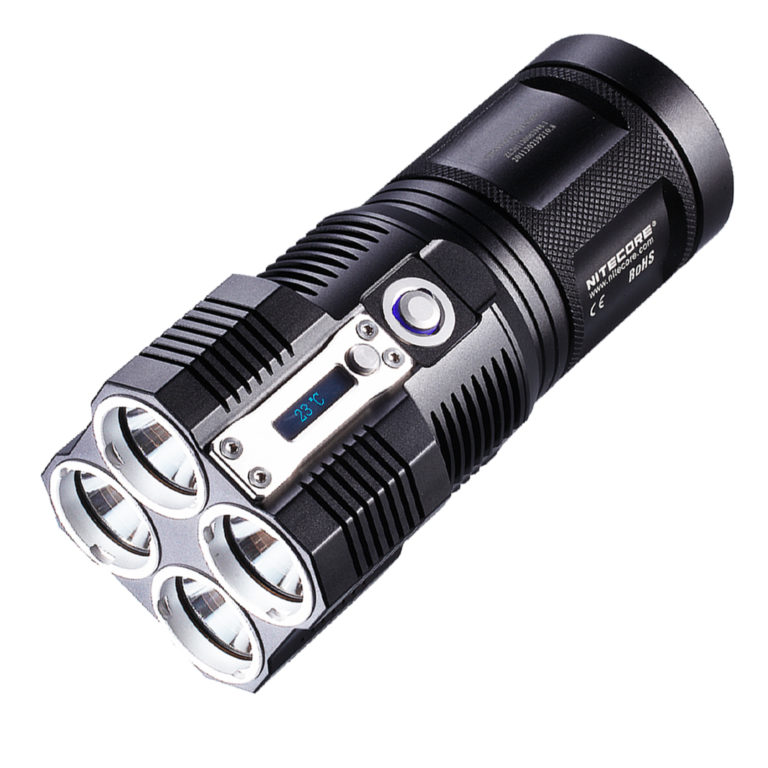 The TM26GT is a longer-throwing upgrade to its TM26 predecessor. Boasting 273 more yards of throw to reach an incredible 770 yards, this light uses a CREE XP-L LED, which has 200% more intensity than the XM-L2 LED used in the TM26. 3500 lumens’ worth of output assures the whole area around you will be lit up with great intensity. 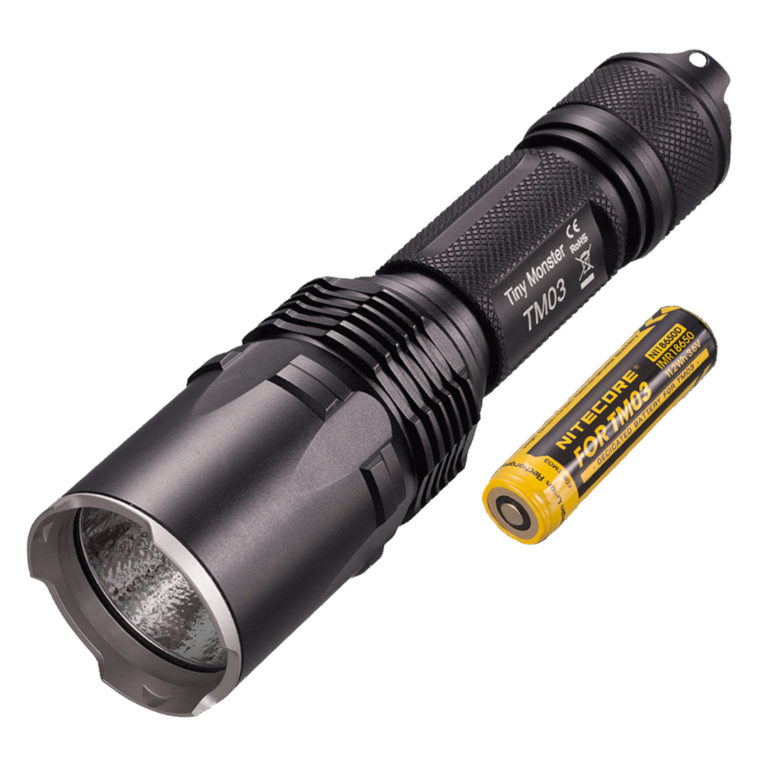 The NITECORE TM03 is runs on a single 18650 battery and is the brightest flashlight on the market to do so. Equipped with a CREE XHP70, this light is capable of up to 2800 lumens available in a suppressive burst for tactical and security purposes. It can be taken anywhere in your backpack or pocket. It is perfect for law enforcement, military, searching, camping, hiking, exploring, security, or anything else that requires extreme luminosity and beam throw. 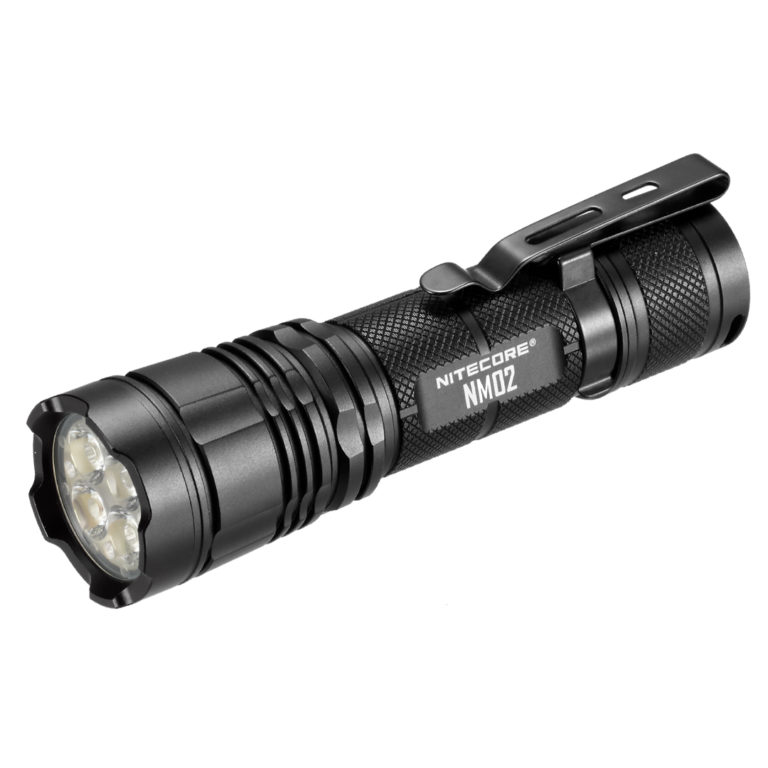 The NITECORE NM02 is a compact and very bright USB rechargeable, flashlight designed for EDC. It pushes 2700 lumens up to 160 yards using a total reflective optic lens for a smooth uniform floodlight, perfect for everyday carry, while sufficient as a work light. It comes with an internal high capacity battery that is capable of up to 45 minutes of uninterrupted 2700 lumen turbo and up to 310 hours at the lower mode. The NM02 is incredibly budget friendly; a finely tuned balance of performance of quality. 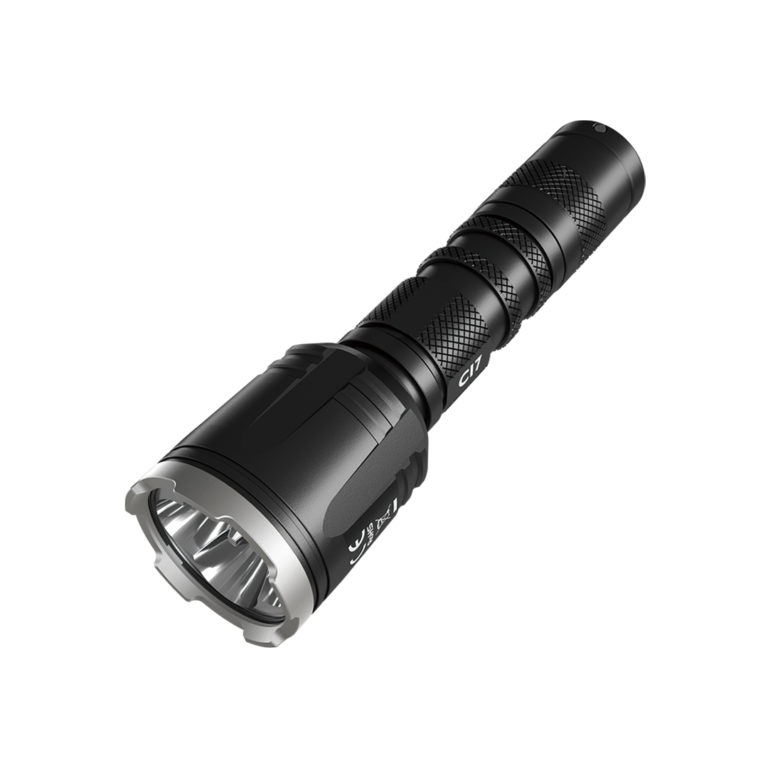 The NITECORE CI7 is the ultimate flashlight for night vision hunting or outdoor operations. This dual-output flashlight pushes an incredibly bright 2500 lumens of light, reaching over 300 yards. Rotating the flashlight head instantly turns the CI7 into an adjustable 7000mw long-range IR illuminator.

Do You Need a Flashlight with Beacon Mode?
How to Signal SOS with a Flashlight?
What flashlight does the military use?
What kind of Flashlights do Firefighters use?
Leave a Reply