Everything You Need to Know about 18650 Batteries 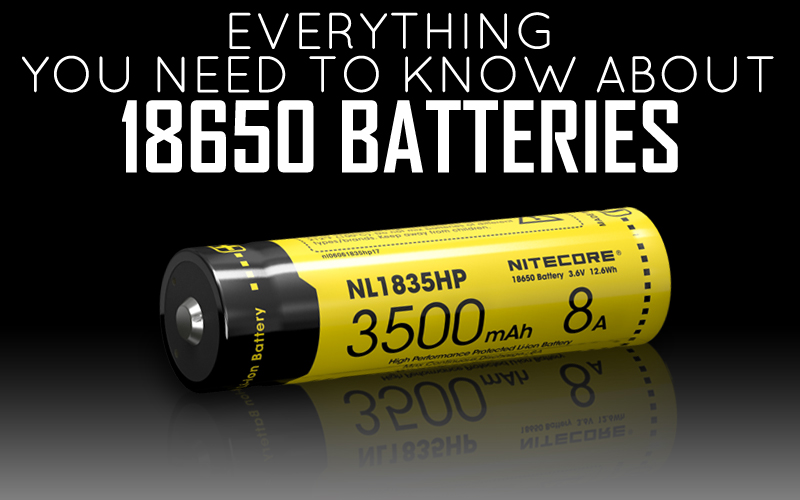 “What type of battery does it use?” is easily one of the most frequently asked questions we get from new customers. The answer, for the vast majority of NITECORE flashlights, is an 18650 li-ion cell which is often a departure from the AA, C or D cells that most people are familiar with.

If you fall into this category, it can be a little daunting to decipher all your different options and order cells online you can be confident will be compatible with your device. Have no fear! Today’s blog will tell you everything you need to know about 18650 batteries and have you up to speed in no time.

So what exactly is an 18650 battery? This naming convention refers to a lithium ion battery cell that is 18 mm in diameter, 65 mm in length and circular in shape. These batteries offer a balance between capacity, output, rechargeability and dimensions that have made it one of the most common power sources for today’s LED flashlights.

A brief history of 18650 batteries

As technology has advanced over the years, and especially in the past decade, the need for batteries which can keep up with modern gadgets has led to the development of cells capable of longer runtimes, higher outputs and better charging abilities. One of those developments is the introduction of 18650 li-ion batteries which were originally used in laptops. (Yes, if you were to take apart an old laptop battery pack, you’d likely find some 18650 cells inside — although we do not recommend this.)

Like most technologies, engineers began looking for other applications for the 18650 battery and two industries quickly seized the opportunity: vaping and flashlights. In both cases, 18650 batteries provided a superior output and capacity to traditional AA/AAA cells, were still small enough to not be cumbersome, and could be recharged for daily and frequent usage.

Nowadays, you can find 18650 batteries in a plethora of products from chainsaws and scooters to even a Tesla Model X. That’s right — since 2013 the battery packs of a Tesla contains 7,104 individual 18650 cells which stores up to 85kWh of energy or enough juice to power a full-size car.

Although some basic things such as the internal chemistry and size remains consistent between 18650s, there are a few options to be aware of.

The first and most important specification to pay attention to when buying batteries for your device is whether or not it requires a button-top cell. All NITECORE flashlights require this added protective circuit which not only provide an overall safer experience, but the added length is what creates a solid connection inside your flashlight. 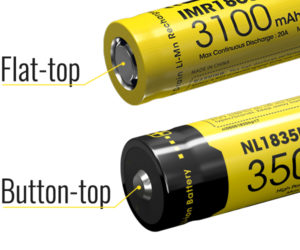 If you recall from high school physics, voltage measures the strength of an electrical charge. Most 18650 batteries will have a voltage rating of 3.6 or 3.7V as it is the expected standard. However, to measure how much of a charge is flowing at any time, we use the max discharge rate which is measured in Amps.

This specification is less important than the first two, but still one that can create a world of difference. Measured in milliamp hours, the capacity of the battery will help you gauge the overall runtime possible on your flashlight or device. The larger the capacity, the more runtime you can get. Our batteries range from 2900mAh to 3500mAh which is the highest capacity currently possible.

As you can imagine, over time more and more customized 18650 models have been designed to suit different applications. From optimizing for better performance in cold weather to adding built-in USB ports, these “special” 18650s are worth a look at! 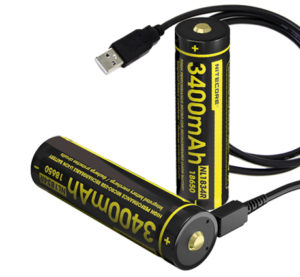 In the past, if you wanted to charge your 18650 battery, you need to purchase a separate charging device or use a built-in charging port if your flashlight had one. Thanks to the introduction of USB rechargeable 18650 batteries, you no longer need anything more than a micro-USB cable and a USB power source. These batteries feature a micro-USB port on the positive end of the battery and are a great solution for anyone looking to keep their gear footprint to a minimum. 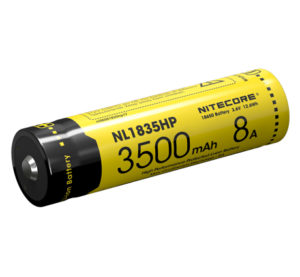 We mentioned above that some flashlights will require a higher discharge rate than a “normal” 18650 battery provides. In the past, these higher discharge rates were only found in flat-top cells used by the vaping industry. Of course, the downside of these cells is they do not have a protective circuit and are less user-friendly overall.

The solution? The High Performance 18650 battery. Designed to offer a max discharge rate of 8A in a button-top battery, these cells are a must-have for any of our GTS flashlights like the P12GTS, MH12GTS and MH25GTS. And if you’re wondering whether or not these batteries are safe for your older devices as well, the answer is yes! 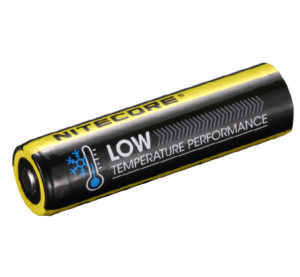 For all of the benefits of a li-ion battery compared to other options, one of the bigger downsides is how they perform in extreme cold. The traditional go-to for cold weather applications has long been CR123A non-rechargeable batteries for their ability to work in temperatures below zero thanks to a slightly different internal chemistry (lithium manganese instead of lithium ion) . As you can guess, the problem there is you can’t recharge them.

Now NITECORE carries a line of 18650 batteries designed to perform in temperatures all the way down to -40­°F/C. We carry both the NL1829LTP which is a basic 18650 low temperature battery as well as the NL1829LTHP which offers the same low temperature performance with the added benefit of an 8A discharge rate for use with our 1800 lumen flashlights.

2 thoughts on “Everything You Need to Know about 18650 Batteries”