Lumens, candelas and lux: How flashlight brightness is measured

Last modified on July, 2019 by Chinhua

You’ve probably seen these measurements on the side of your flashlight’s packaging, but do you really know the difference between lumens and candelas? And what about things like watts and lux?

If you’re new to LED flashlights or just looking for a refresher, we put together this guide to help you navigate the various terms used when measuring the brightness or luminance of a flashlight.

What is a Lumen?

This is the term you’re most likely to see advertised when shopping for flashlights, and for good reason! Lumen (lm) is a measurement of the total energy output (or total visible light) from a light source in all directions. Lumens help you understand one crucial piece of information: how much light is emitted by this flashlight?

How lumens are derived is beyond the scope of this blog, but an easy reference to remember is that 1 lumen is equal to the amount of light illuminated by 1 candle in a 1-square-foot area. To help you get a feel for how many lumens you might need, here is a handy chart that gives some common light sources and their lumen output. 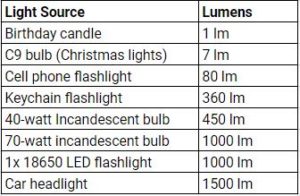 How are Candelas related to Lumens?

Called such because 1 candela is approximately equivalent to the output from a candle, candelas measure the intensity of light in an single direction. This measurement comes into play when looking for flashlights with long throw distance. Although the reflector shape and size will also have an affect on throw distance, a higher candela rating tends to be indicative of a longer throw beam since the more intense light can be seen at greater distances.

Lux is a proportional measurement that calculates the amount of light on a particular surface. You usually won’t see this measurement when discussing flashlight specifications because lux is affected by the distance the illuminated surface is from the light source. As the distance increases, the overall lux decreases. Since flashlights are designed to be carried and not in a fixed position, we can go ahead and disregard lux.

What about watts, you’re asking? Unlike the above units of measurement, watts are not really a measure of brightness at all but instead are a measurement of the power consumed by a product — usually a light bulb. The problem with using watts is that each lighting technology – incandescent, LED, halogen etc. – produces a vastly different lumen outputs per watt used.

For example, a traditional 60-watt light bulb produces roughly 800 lumens of light. An LED bulb with the same lumen output would use roughly 12 watts by comparison! By using lumens over watts as a measurement, it’s much easier for consumers to directly compare different light sources.

Rain, Sleet, Snow and What Your Flashlight's Waterproof Rating Means
Find the Best Type of Flashlight, Headlamp, or Lantern for Any Task
Built-in vs Removable Batteries: Which is Better for Your Flashlight?

2 thoughts on “Lumens, candelas and lux: How flashlight brightness is measured”